The members of the jury, chosen with multiple criteria, almost always have relapsed into a recognized group of artists, intellectuals and cultural promoters, who have been responsible for awarding the distinctions.

The jurors were divided, in some cases, into two categories: admissions and awards, plus a Hall Director. On many occasions, the same jury was in charge of the two most important moments, this is, to be admitted and be rewarded.

The first place of the 57th July Hall was awarded to a work inspired by the funeral of soul singer, Otis Redding, nicknamed the King Of Soul. The piece entitled Karla, Otis III and Dexter Redding belongs to the visual artist Jorge Morocho.

"It is part of a body of work that I am working on. It basically stems from the drawings of a filmmaker whom I like very much, and is mixed with certain soul and of contemporary and modern pop icons (...). This was the approach to Otis Redding, an icon of classical soul," said the 24 year old artist.

This is the second time that Morocho wins first place in this contest, organized by the Municipal Cultural Directote. Last year his piece The teeth of Chet B conquered the members of the awards jury of the July Hall.

Through a collage, the young student of the UArtes, makes a registry of "second or third floor facades that have been discontinued in time" and located them "in a composition of imaginary citadel, taking the panopticon as axis (imaginary penitentiary center) which is a symptom of the surveillance to which all of us in the city are subject".

Air Force One (Boyeros), by David Orbea ranked in the third place of the Hall. The work speaks of the historic visit of the President of the United States, Barack Obama, to Cuba.

"In this pictorial process in particular, I took media images and I found the idea of the United States penetrating into Cuba interesting, and this can lead to certain questions," the 31 year old artist said.

At 19:00 today, the exhibit of the 17 works that were selected for this year’s July Hall will be inaugurated in the Municipal Museum. 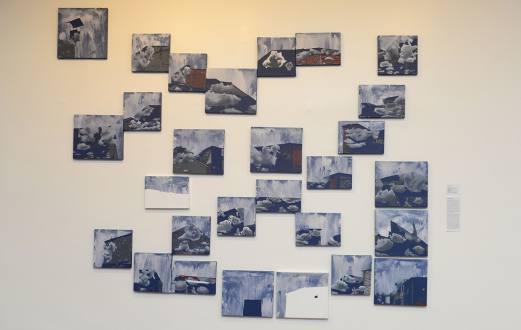